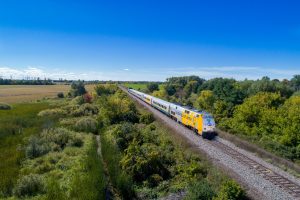 The Government of Canada has announced a procurement process to build Toronto – Quebec high frequency rail corridor with the request for proposal expected to be launched in fall 2021.

The procurement process includes the engaging of Indigenous groups and communities to obtain feedback on the project, as well as accelerating dialogue with partner railways to negotiate dedicated routes in and out of city centres.

The process will involve the private sector to determine the capacity and seek perspectives on the best possible delivery model.

The dedicated passenger rail corridor will allow a travel speed up to 177-200 km/h, which could result in reduced travel times of up to 90 minutes on some routes, such as Ottawa to Toronto.

The high frequency rail corridor proposal involves building dedicated passenger rail tracks which would provide many key benefits to travellers, including shorter travel times and faster trains, more direct routes and more frequent departures between cities. The new passenger services will provide more reliable on-time arrival performance of up to 95 per cent from a current average of 67 per cent.

“Canadians deserve a fast and reliable train service. Today, we are taking the first steps in preparing for the procurement process to build a new train service in the Toronto to Quebec City Corridor. The High Frequency Rail in the Toronto to Quebec City Corridor is a massive transport project with the potential to transform passenger rail service by offering faster, more reliable, more frequent, and cleaner transportation service,” Omar Alghabra, the Minister of Transport said.

The Government of Canada has been working closely with VIA Rail and the Canada Infrastructure Bank to make significant progress in designing and planning an improved passenger rail service between Toronto and Quebec City that will deliver good value for taxpayers and better options for travellers.

“We will bring our expertise in leveraging public, private and institutional investment to support the next steps to modernize intercity passenger rail,” Ehren Cory, the CEO, Canada Infrastructure Bank said.

It is expected that High Frequency Rail corridor could nearly triple the amount of annual trips taken by rail in the Toronto to Quebec City Corridor, rising from 4.8 million in 2019, to a projected 17 million by 2059.