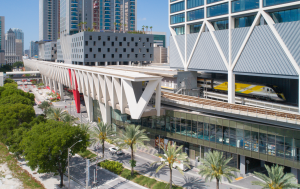 California Debt Limit Allocation Committee announced USD 600 million bond approval for LA HSR project which will be developed by Virgin Trains USA. This means that the company can launch the construction works this year, with the line linking Las Vegas and Southern California.

The decision provides Virgin Trains USA the possibility to leverage up to four times the allocation amount totalling USD 2.4 billion.

In March, the U.S. Department of Transport approved USD 1 billion in tax-free private bonds for the project.

Under the project, a 270-km long line will be constructed to connect Las Vegas and Southern California. The line would link Victorville, 140 km northeast of Los Angeles, in County of San Bernardino, to Las Vegas, allowing passengers to travel from Southern California to Las Vegas. The eastern terminus of the line is expected to terminate 1.6 km south of Las Vegas Strip, the casinos and hotels areas.

The eastern end of the line is expected to terminate a mile south of the Las Vegas Strip, which is host to numerous casinos and hotels. Two stations will also be built as part of the project.

At the end of 2019, the California Infrastructure and Economic Development Bank, IBank, approved bonds of USD 3.25 billion which will support the construction of the new railway line.

The so called XpressWest will provide a 90 minute-travel time from Victorville to railway stations in Las Vegas. The trains will run at speeds of 290 km/h annually removing 3 million cars off the road. The project will annually reduce the CO2 emissions by 100,000 tonnes.  The project will create “thousands of construction jobs and a USD 6 billion impact, when our economy could use it the most,” Brightline says.

This means 3 million cars taken off the road annually and 100k tons of CO2 removed annually compared to road travel.