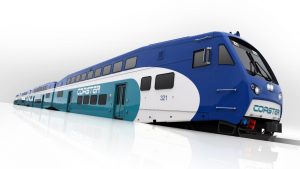 North County Transit District (NCTD), the transport agency in North San Diego County, awarded Bombardier Transportation a EUR 37 million contract for the supply of 11 BiLevel rail cars which will be deployed on Coaster service route. NCTD also has the option to purchase up to 27 additional cars to support its ongoing state of good repair needs.

The deliveries are scheduled to take place in the fall of 2022. After testing and commissioning, the cars will begin to enter service that winter.

Under the base order, Bombardier will deliver eight coaches and two cab cars for increased service levels, as well as an additional cab car.

By acquiring these new BiLevel rail cars, NCTD will significantly increase service frequencies to 30-minute headways. This will result in 42 trains per day, nearly doubling current service. Currently, headways between trains vary from 45 to 60 minutes during peak periods and more than 3.5 hours during the non-peak period.

The new cars will be built at Bombardier’s manufacturing site in Thunder Bay, Canada.

“With these two additional trainsets in the fleet, commuters will have a number of train-runs throughout the day to meet their needs and that really makes the decision to try transit an easy one,” Tony Kranz, NCTD Board Chair said.

The Coaster commuter train service runs in north and south through San Diego County, serving eight stations between Oceanside and downtown San Diego. It takes about an hour to travel the entire Coaster route.