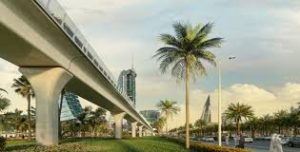 ‘The tender on the first phase of Bahrain metro system is expected to be launched within the next year. According to the preliminary design, it will be similar to Dubai metro system. The prequalification process will take around six months,’ said Didar Dalkic, Adviser to the Bahrain Ministry of Transport, at the Middle East Rail held in Dubai, on 25-26 February 2020.

The first phase of the metro system will consist of two lines with a total length of 29 km, served by 20 stations, of which two stations will offer interchange from one line to another. The lines, which will be operated by driverless trains, are expected to be operational in 2027.

The first line, which will be served by 9 stations, would connect the Airport to Seef Mall through Airport Avenue and King Faisal Highway, the Avenues Mall, Bab Al Bahrain, and Bahrain City Center Mall. The second line will run from Juffair, a suburban neighborhood of Manama, to the educational area in Isa Town, crossing the Al Fateh Highway, diplomatic area, Bab Al Bahrain reaching to Al farooq Junction.

The two lines will be interconnected at Bab al Bahrain and al Farooq Junction stations.

The system capacity will be 43,000 passengers per hour.

According to the Ministry of Transport, the new metro system will be formed by four lines with a total length of 109 km, expected to become operational until 2055. The metro system will offer friendly-environmental transport services to country’s main economic, administrative and educational centres.

On the other hand, Bahrain is continuing the development of the railway project which will ensure transport connection to the GCC network. Called the King Hamad Causeway project, it will be linked to Saudi Arabia transport system through the Causeway, a road-rail connection spanning 50 km.

‘We are expecting that the tender will be launched within the next 18 months to 2 years. Under the PPP project, we expect to conclude construction works contract and the operational deal,’ Didar Dalkic explained.

In October 2019, Saudi Arabia’s King Fahad Causeway Authority signed a consultancy contract with a consortium of KPMG, AECOM and CMS to develop the financial model, the required engineering specifications and design of the King Hamad Causeway road-rail project.

The tender on the project would be launched next year. The King Hamad Causeway project is estimated at USD 3.5 billion and it is expected that the construction works will take three years to be completed.