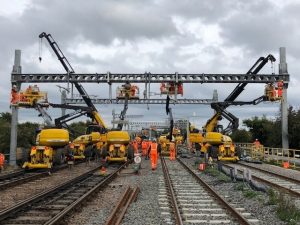 Atkins will use digital image correlation technology to analyse the relationship between OLE uplift, OLE system type, train speed and pantograph type, installed at low bridges with low headroom or long width, with twin contact arrangements, and use data to develop new rules for OLE design.

The new rules will be used by OLE designers to reduce route clearance costs, including bridge reconstruction and track lowering, for new rail electrification schemes.

“These rules of design should, where technically achievable, cover as many types of Network Rail OLE as is reasonably practicable; be based on robust and documented evidence; and strike a balance between conservatism and complexity,” Malabika Das, project manager, Strategic Rail at Atkins, said.

As part of the UK’s net zero 2050 targets, new electrification is the only viable way to decarbonise core rail routes on the railway network. Bridge reconstructions to create sufficient space can cost up to £1million (EUR 1.1 million) or account for a third of an electrification scheme’s total cost.

The contract intends to result in smaller values of uplift being used, which can potentially convert a bridge reconstruction into a ‘no work required’ analysis, reducing electrification scheme capital costs.

Measurement and data collection will be carried out by the Atkins digital image correlation team which specialises in non-contact measurements in a live rail environment using imaging systems and correlation algorithms. The team has recently measured structural deflections to 0.05 mm accuracy on over 16 locations for a variety of clients. Experience also includes understanding the behaviour of overhead line equipment from first principles and the relationship between OLE geometry and dynamic performance.