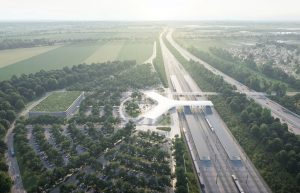 Czech railway infrastructure manaher, Správa železnic (SZ) has chosen the winning architectural design for Prague East high-speed terminal. After it has assessed a total of 21 designs, winner of the competition became the design of “MP + ov Nehvizdy 2020” by the author duo Jiří Opočenský and Štěpán Valouch.

The architects, in cooperation with urban planners and traffic engineers, had the opportunity to design the exact location and exterior and interior form of the new high-speed rail terminal on the Prague border, including parking spaces for 3,000 cars and regional bus connections, from the beginning of September to the end of November last year.

The designs were evaluated by a jury composed of six independent architects, two representatives of Správa železnic and the mayor of Nehvizdy, in the immediate vicinity of which a new station will be built.

The second place belongs to the design “ra15 a.s.” directed by the author’s team Radek Lampa, Libor Hrdoušek, Max Petricov, Daria Vlasova, Erik Sovet and Daniil Solovev. The third place went to a proposal from the Polish company SBS Engineering Group, elaborated by architect Maher Matar. In addition, the jury awarded the other two designs for their originality and quality.

The planned terminal will serve mainly the inhabitants of the north-eastern part of the Central Bohemian Region and the neighbouring areas of the capital. The purpose of building this peripheral station is primarily to enable residents living in the area to take advantage of high-speed rail transport without the need to drive to the centre of the metropolis.

According to foreign experience, it can be expected that the Prague East high-speed terminal will become an impetus for the development of the adjacent area. Therefore, the architectural competition also had a second, urban part, in which the competition teams developed the wider surroundings of the terminal. The designs examined several possible approaches, from relatively dense urban-type development to the open countryside, as well as the gradual transformation from the station in the open countryside to the centre of the new city. The discussion on the integration of the new station would not be possible without numerous different perspectives and will certainly continue at the level of the region and neighbouring municipalities.