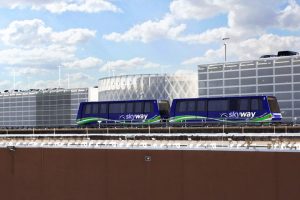 Under the agreement, Alstom will be responsible for 24-hour train operations and dispatching as well as maintenance of the Innovia vehicle fleet, guideway, signalling system, and facilities including stations and the maintenance building. This follows a previous ten-year services contract with Bombardier Transportation, which is now part of Alstom.

The system is 1.1 km–long running along the north side of the airport, beyond airport security. A fleet of 12 Innovia APM 100 vehicles operated the system, offering a capacity of 80 passengers each.

All the five terminals of Houston Airport are connected by the Skyway automated people mover system which provide a 4-minute travel time from the Terminal A station to the Terminal D/E. The trains depart every two minutes from the Skyway stations to the terminals.

The system operated since 1999 with two stations, connecting C and B terminals but in 2001 was expanded from the Terminal C to D and in 2010, the extension to the Terminal A was completed.