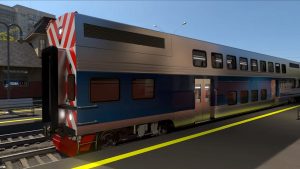 The Board of Directors of Metra, the commuter rail operator in Chicago area, approved the procurement of 500 double-deck coaches from Alstom. USD 1.8 billion is the value of the contract with an initial order for the supply of 200 cars, and the option for 300 additional multilevel cars.

The first car is expected to be delivered within 42 months after the contract is signed, with the full base order complete 30 months later.

According to the contract, the new vehicles will be based on the Coradia Duplex platform, but will be constructed in a customised version, to meet Metra’s requirements. They will be manufactured at Alstom’s facility in Hornell, New York, while a third of the railcar contract value will be provided by Illinois-based suppliers.

“We are finally modernising one of the oldest fleets in the country and, in doing so, we will improve operations while elevating our passenger experience to an entirely new level. It’s really part of our long-term plan to evolve and serve the changing needs of today’s commuters,” Jim Derwinski, the Chief Executive Officer of Metra said.

About 40 percent of Metra’s current fleet of 840 cars are rated in marginal or poor condition, although they are still safe to operate. The new coaches will offer increased reliability, while reducing operating costs, a substantial improvement over the increasing expense of maintaining the older cars.

The project, which is part of Metra’s plan since 2014, is the first coach fleet acquisition in more than two decades. With consideration given to the impact of operational cost savings, the Board voted unanimously to approve the purchase.

The new coaches will have stainless steel bodies and will be compatible with Metra’s existing fleet, which means they can be coupled to current cars. They will also feature many reliability and safety upgrades, including a microprocessor-controlled braking system, electrically operated doors and passenger area cameras.

The double-deck coaches will have two entrance ways on each side with doors nearly level to the platform, thereby requiring only one step to enter instead of multiple steps on the old gallery cars. These changes will improve passenger flow, increase safety and reduce time spent boarding and deboarding at each station.

The cars will also be wheelchair accessible for people with disabilities, deploying lifts to bridge the slight difference between the platform and entrance.

“From an operational perspective, most people don’t realise that we are constantly making upgrades to tracks, bridges and our car servicing. But this is something that our passengers will immediately see, feel and smell,” Bruce Marcheschi, Metra Deputy Executive Director said.

For the design of the new coaches Metra held public consultations in 2019. The new cars will be designed for modern-day comfort and teeming with passenger amenities, including video screens, bike racks, special places for luggage, charging outlets, cupholders, arm rests and other features which will provide passengers increased comfort.

The new coaches will be significantly quieter and deliver a noticeably smoother ride. They will be equipped with the most advanced HVAC system available which will scrub the circulated air, reducing staleness, allergens and airborne viruses.