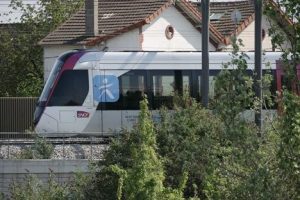 In total, 11 trains are destined for line T4 (Bondy/Aulnay-sous-Bois and Montfermeil Hospital), and 2 trains for line T12 (Massy/Evry).

“Following the entry into commercial service of the Citadis Dualis tram-trains on line T4 in December 2019, and as we currently produce the trains for line T13, I am delighted that Alstom is continuing to deploy the tram-train solution in the Île-de-France region,” said Jean-Baptiste Eyméoud, President of Alstom in France.

The tram-trains are designed to meet the increased need for mobility between urban and suburban networks. The Citadis Dualis tram-train links the centre of town with the suburbs without any break in continuity, by combining the advantages of the train with those of the tram.

Based on the design of Alstom’s Citadis tram, the Dualis version retains the fundamental characteristics such as the modularity, accessibility, and reliability.

The vehicles can run on a tram network just as easily as on a regional rail network thanks to certain adaptations in power, safety, and comfort. This configuration makes it a versatile means of transport as it has the same gauge as a tram, meaning it can circulate in town, while its performance, the same as that of a train, enables it to carry passengers at nearly 100 km/h in outlying areas without having to change transport modes. Citadis Dualis plays a role in sustainable mobility by revitalising urban spaces and enhancing the architectural heritage of cities.

To date, 78 Citadis Dualis tram-trains are in operation in France. This includes 30 in Île-de-France, 24 in Auvergne-Rhône-Alpes and 24 in Pays-de-la-Loire.

This exercise of options is part of the tram-train contract signed in 2007 with Transilien SNCF for the delivery of up to 200 tram-trains. In 2018, Alstom received an order to supply 34 additional Citadis Dualis tram-trains to Île-de-France Mobilités and Transilien SNCF, with Île-de-France Mobilités covering 100% of the investment cost of the trains. 23 tram-trains are destined for the T12 Massy/Evry line and 11 for the T13 Express Saint-Cyr/Saint-Germain line. These trains are currently being developed and manufactured at Alstom’s Valenciennes Petite-Forêt site.