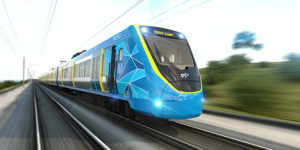 An interior mock-up for stakeholder consultation is planned for next year, with manufacturing due to commence by the end of 2022.

The train order follows the budget support announced in May 2021 when the Victorian Government committed AUD 986 million (USD 713.96 million) funding to acquire the new train fleet.

This new generation X’trapolis trains will deliver a much-needed network capacity increase without the need for major, costly infrastructure and power supply upgrades. The new trains will be more accessible, reliable and energy efficient.

The trains will be designed and built in Victoria, and under the contract, the project includes at least 60% local content that will boost the state’s advanced rolling stock manufacturing industry, securing the future of Alstom’s Ballarat manufacturing facility, and pave the way for new, long-term employment opportunities in the rail industry, including multiple trainee and apprenticeship positions.

The trains capitalises on key elements of the existing X’trapolis trains, which enabled it to become the most reliable fleet on the Melbourne network. The proposed new design enhances the existing elements with the latest service-proven technologies. The new train’s capacity will exceed 1,240 passengers and will be built to the latest International and Australian standards, with an increased focus on accessibility and efficiency.

The delivery of the new trains will support the gradual retirement of the Comeng fleet, the longest-running trains on the network, with the new trains set to run through some of Melbourne’s fastest-growing suburbs along the Craigieburn, Upfield and Frankston lines.