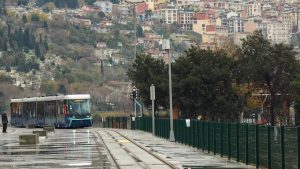 Alstom announced it has deployed the APS system on the 10.1-km long Eminonu – Alibeykoy tramway line in Istanbul, served by 14 stations. The 9-km section between Balat and Alibeykoy of the new tramway line, which was inaugurated on 1 January 2021, will reduce the footprint of light rail lines and preserves the aesthetics of urban environments. The APS, a ground-level continuous power supply system, is applied for the first time in Turkey.

The French company is providing the necessary on-board equipment for 30 tram vehicles manufactured by a local company for the Eminonu – Alibeykoy tramway line. “This is an indication of how adaptable our system is. The system will be a unique signature of Istanbul railway network in terms of innovation, environmental, aesthetic and historical values”, Mama Sougoufara, Alstom Middle East and Turkey Managing Director, said.

With APS the power will be supplied to the tramway through a segmented street-level power rail instead of catenary system. The conductive segments are activated only when fully covered by the tram, ensuring total safety for pedestrians and other road users. The power is picked up by contact shoes located under the vehicle, on the tram’s central bogie.

APS system helps preserve the beauty of the urban environment while guaranteeing the same performance as overhead contact lines. Trams running on APS can also incorporate overhead line equipment and traction batteries, with simple and easy transition between power sources. If a line is extended, it is easy to extend the APS system with it.

Alstom delivered and commissioned the world’s first 100% catenary-free tramway system in Dubai in 2014. The system is currently under operation in eleven cities on four continents with around 50 million km travelled by trams on APS. Alstom has fitted 92 km of single track with the APS to date and 245 Citadis trams equipped with APS technology.