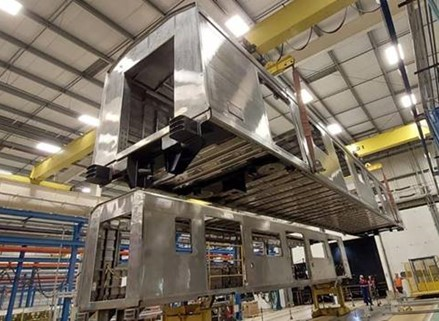 Alstom has started the production of Metropolis trains for São Paulo at its industrial unit in the city of Taubaté, state of São Paulo. They will enter services on the city’s Lines 8-Diamond and 9-Emerald operated by ViaMobilidade.

The first carshells, from which the first cars will be built, have already been completed. In total, 36 8-car trains will be produced at Alstom’s industrial unit in the city of Taubaté, state of São Paulo. They are part of the package of improvements and obligations assumed by the ViaMobilidade concessionaire, responsible for the operation and maintenance of both metropolitan train lines for 30 years.

With a modern design, the new compositions in production at Alstom are lighter, with lower electricity consumption, large windows and aisles that offer freedom of movement between cars, which provides more comfort to passengers. Each train will have the capacity to transport up to 2,500 passengers.

“The renewal of the fleet which will be a legacy of the ViaMobilidade Lines 8 and 9 concessionaire for thousands of São Paulo residents, actually contributing to human mobility, improving the quality of life and expanding paths and choices”, Adriana Martins, Engineering Director at CCR Mobilidade said.

The Metropolis trains for São Paulo are made of stainless steel, which ensure more than 40 years of operation, in addition to being lighter compared to models made of carbon steel. In addition, they consume less energy and are therefore more energy efficient.