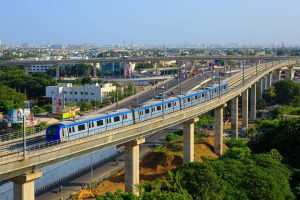 The Asian Infrastructure Investment Bank (AIIB) has approved a USD 356.67 million loan to the Government of India to support the expansion of the Chennai metro system.

The project involves the construction of a new corridor as part of the second phase of city’s metro network. The Corridor 4 will be 26.1 km-long served by 30 stations including six interchange stations, of which four on the metro Corridor 5 and one on the Corridor 3.

16 km of the total length of the line including 18 stations will be elevated while 10.1 km and 12 stations will be underground. This year, a USD 155 million contract was awarded for the construction of 7.95 km elevated viaduct part of the corridor.

The line will span from Lighthouse in the eastern part of the city to Poonamalee Bypass in the west to ensure seamless multimodal transport across the city by providing integrated access to suburban rail, bus stations and the city’s main airport. In addition, the project will address traffic bottlenecks and reduce greenhouse gas emissions by increasing public urban transport options.

“This project is aligned with AIIB’s mandate to support high-quality and sustainable infrastructure. The improvement and integration of the transport sector in Chennai will further promote trade and economic growth,” AIIB Vice President, Investment Operations, D. J. Pandian said.

The design and construction work of metro Corridor 4 are based on an environmentally friendly concept which will help to reduce the carbon footprint. The elevated stations will benefit solar panels installed on the roofs, will have dedicated spaces for bicycles and green vehicles and signage to raise environmental awareness. The project also integrates climate change resilience features to reduce its vulnerability to climate-related events.

The Chennai metro system will be created by five corridors with a total length of 164 km served by 160 stations. The second phase covers the construction of three corridors totalling 118.9 km and 128 stations. The 45.8 km long Corridor 3 will be constructed from Madhavaram to Sipcot, on north-south axis, while the 47 km Corridor 5 will be constructed from Madhavaram to Sholinganallur. The second phase of the metro network is expected to be completed by the end of 2026.