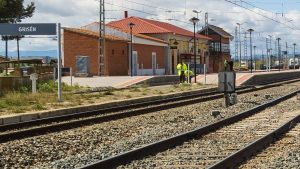 Adif has awarded Inse Rail the draft project contract for integral remodeling of Zaragoza Grisén station to improve the operational capacity and functionality of the railway operation and the existing facilities. The project will also improve the safety for citizens and train traffic through the construction of underpasses to remove level crossings between platforms.

Under a EUR 397,000 contract, the company will deliver the documents within 10 months.

Zaragoza Grisén station is situated on the Madrid-Barcelona conventional gauge line. The passenger train service between Madrid, Euskadi and Navarra is delivered through the Madrid-Barcelona high – speed line, to the Plasencia de Jalón interchange, using the Grisén-Cabañas de Ebro by-pass.

The current configuration of the station’s tracks forces trains to travel by a diverted track, which affects the eight trains running in each day in both directions.

The project consists of the removal of the level crossings between platforms, the extension of the by-pass track to 750 metres to accommodate the longer freight trains and to provide smooth and direct movement of the trains with no impact on the traffic.

For the reconfiguration of the infrastructure system two track devices will be replaced by modern ones, removing the bottleneck at the Zaragoza loop and on the Cabañas de Ebro bypass. Another track device on the Madrid direction will be moved towards Plasencia de Jalón allowing increased speeds on the Zaragoza rail system through a deviated track which will improve the regional traffic.

Thanks to the reconfiguration of the tracks, the trains will avoid the by-pass and will have direct access.

The project will be financed by the European Union through the NextGenerationEU recovery instrument.