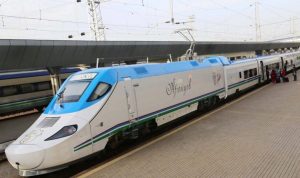 The Asian Development Bank (ADB) has approved a USD 121 million loan to complete the modernisation of Ferghana Valley railway network in the eastern Uzbekistan.

The loan will supplement the USD 80 million financing provided by ADB in 2017 for the electrification of 145.1 km railway track between the cities of Pap, Namangan, and Andijan in the Fergana Valley. In September 2020, contract awards totaled USD 80 million, representing 99.9% of the 2017 loan amount, and disbursement reached USD61.40 million, 76.8% of the loan amount.

The project involves the modernisation and electrification of the Pap – Namangan – Andijan line expected to be completed in 2025. The project, approved in 2017, will complete the electrification of the lines in the populous Fergana Valley. It is part of CAREC Corridor 2 for which the Government of Uzbekistan and Uzbekistan Railways have requested technical assistance from the Asian Development Bank to prepare two projects to further modernise the railway network. The second project also involves electrification works for Bukhara – Miskin – Urgench – Khiva line for which ADB has prepared the technical assistance report.

In the eastern Uzbekistan, the network consists of a loop linking major cities in the Fergana Valley and a line from Pap through the mountainous Kamchik Pass to Angren and Tashkent. The branch lines extend into the Kyrgyz Republic and Tajikistan. However, most of these lines were built in the Soviet era and designed to be used by fewer trains running on steam and diesel.

The additional financing will help expand the amount of freight transported and the frequency of passenger trains, eliminate gaps in signaling and telecommunications systems, and improve the capacity of railway staff in modern train management techniques.

“This expanded support will help ensure that trains on the modernised railway network operate safely and more frequently. The project will enhance the attractiveness of railways as an environmentally friendly, reliable, and affordable mode of transport for the people of Uzbekistan,” said Ko Sakamoto, ADB Principal Transport Specialist for Central and West Asia.

Uzbekistan’s railway network is an important engine of the country’s economy, with a market share of 30%–40% of its freight transport sector and 3%–4% of its passenger traffic. The railway network carries about 60 million tonnes of freight and 15 million passengers annually.