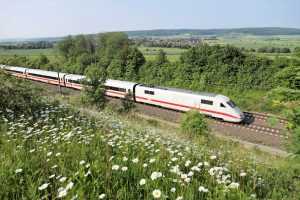 DB recently obtained the operating permit from the Eisenbahn-Bundesamt that allows the converter upgrade. The permit was granted after intensive testing of two upgraded pilot locomotives, and this milestone marks the start of the project. The replacement with a form, fit and function compliant ABB traction converter solution enables the high conversion pace of two ICE 1 locomotives being upgraded roughly every two weeks with the entire refurbishment project expected to be completed in the third quarter of 2023.

The traction equipment converts the electrical energy from the overhead power line to the right voltage and frequency to drive traction motors. The traction converters selected are based on ABB’s three-level high power electronic platform, resulting in minimised energy losses, reduced mechanical stress on the existing traction motors and less noise.

Upgrading to IGBT technology is an efficient and economical solution that elevates the traction system to that of modern trains with respect to reliability, energy efficiency and ease of maintenance. Energy savings of at least 8 percent are expected which is equivalent to the annual electricity consumption of 5,000 households.

“This replacement enabled significant energy savings and reductions of operating costs that were higher than expected. Together with our investments in energy efficient new rolling stock and new maintenance facilities this project is another milestone to strengthen our position as the most climate-friendly transport mode,” Philipp Nagl, the Executive Director Production DB Fernverkehr at DB said.

Replacing existing power electronics from the 1990s with state-of-the-art traction technology will help to significantly extend the operating life of the ICE 1 fleet making it fit for service for at least another decade. Financial details of the contract were not disclosed.

ABB traction converters were successfully deployed in a the first batch of 40 modernised ICE 1 high-speed locomotives in 2010.