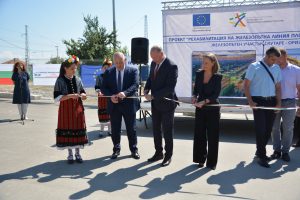 Bulgaria has opened the modernised Skutare-Orizovo railway section, which is part of the second phase of Plovdiv – Bourgas line modernisation project.

Under the project, the signalling and the telecommunication system was modernised.

Skutare-Orizovo railway line now allows trains to run at speeds of over 130 km/h. The section “is extremely important for the deployment of probably the most significant railway network between the border with Serbia and the Black Sea,” Rossen Jeliazkov, the Minister of Transport said.

In 2018, the EU allotted EUR 293 million through the Cohesion Fund for the modernisation of Plovdiv – Burgas railway line, split into four sections: Orizovo – Mihailovo, Skutare – Orizovo, Yambol – Zimnitsa and Starldzha – Tserkovski the last one being completely modernised in 2018.

The Plovdiv – Bourgas railway will be completed modernised in 2023 when the line “should be associated with the concept of European railways,” Jeliazkov said. When all modernisation works will be completed, the travel time between Sofia and Burgas will take less than 4 hours, from currently 6-7 hours.

Making railways as the most modern transport for passengers and cargo is not only important for Bulgaria, but also for the EU and the Pan-European connection, especially in the context of the Green Deal and the transition from analog to digital world, Jeliazkov explained at the opening ceremony.