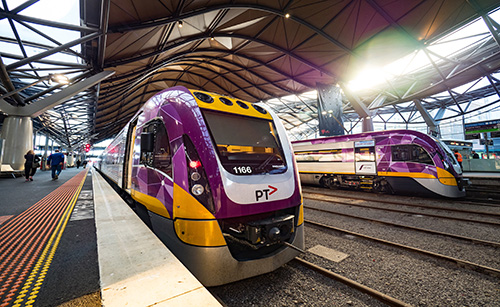 The Government of Victoria has delivered the 100th locally built high-speed VLocity train improving connectivity for regional Victorians. Alstom is manufacturing the trains in Dandenong, with 65 percent of the manufacturing process being local content.

The one hundredth regional VLocity train hit the tracks on the Warun Ponds to Southern Cross line on September 2, 2022. The now 100-strong VLocity fleet has travelled millions of kilometres, made tens of thousands of trips and moved millions of passengers since the first service, supporting thousands of high skilled jobs.

The entire VLocity fleet has the capacity to move more than 21,000 passengers, the equivalent to moving the entire population of Wangaratta at once.

“VLocity trains have moved millions of passengers across Victoria and will continue to be a critical part of building a strong public transport network into the future,” Minister for Public Transport Ben Carroll said.

The first new high-speed VLocity train started passenger services in December 2021 following the completion of a thorough testing process. The Department of Transport, V/Line and train manufacturer Alstom worked with passenger, tourism and accessibility representatives from North East Victoria in late 2019 to design the first new VLocity trains for the North East line.

Since 2015, the government has delivered a 40 per cent increase in regional rail services, with V/Line now running more than 2,200 services every week.

These investments are part of the government’s continued commitment to improving public transport for all Victorians – no matter where they live.