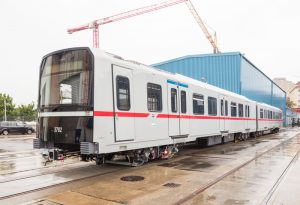 The CEO of Wiener Linien, Günter Steinbauer, the Executive City Councillor for the Environment, Ulli Sima, and the representatives of Siemens Mobility have presented the first X-Wagen type train at the Simmering plant.

The new generation of metro train is expected to enter operation from 2022 on the U1-U4 and in 2025 on the U5 automated metro line section between Frankhplatz and Karlsplatz.

Within the next few weeks, the six-car train will enter trials which include the commissioning of the vehicle, brake tests, train protection tests or acoustic measurements. After appropriate preparation, the interaction of the new train with the future platform screen doors of the U5 is checked and test runs are carried out in fully automatic mode.

The operation license is expected to be awarded after successful tests will be performed on the U-Bahn network. The train has passed the extensive tests at the Vienna Climatic Wind Tunnel.

“The X-Wagen is a trend-setter for Vienna’s climate commitment. <Use public transport, protect the climate> is a very simple and effective measure for the environment in Vienna. Anyone who drives our public transport saves a full 1.5 tonnes of CO2 a year We set new climate and environmental standards with an outstanding public transport network,” Ulli Sima said.

The X-Wagen type train features a recycling ratio of more than 90 percent. Special and continuous lightweight construction measures across the entire design of the vehicle were used which significantly reduce overall weight of the train. Low energy consumption is ensured by  LED lighting and extremely low-energy heating and air-conditioning equipment. The recovery of braking energy directly into the third rail also contributes to this factor.

The six-car metro train will have a capacity of up to 928 passengers, with 46 more people compared to the existing V-Wagen trains. The driver’s cabs are innovative as they can be completely removed. When running fully automatically, this enables the area of the driver’s cab to be used by passengers, which increases the passenger capacity of the trains. 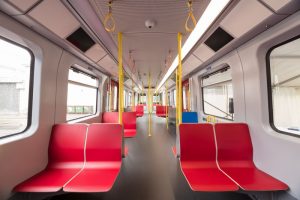 The new cars will be entirely navigable, accessible, air-conditioned and fitted with video surveillance. X-Wagen is the first metro train in the world to use the innovative Passenger Information System (PGI) Plus. Prior to reaching the next stop, information displays located above every door offer location-dependent passenger guidance on the next station including all connecting trains. This enables passengers to know in which direction they will have to continue following arrival and leads to an optimisation of both the passenger flow as well as travel comfort.

Günter Steinbauer said that the new train is “a new chapter in the history of Vienna’s metro” and due to the system expansion, the trains will “become the ecological lifeline in the city”.

In September 2017, Wiener Linien awarded Siemens Mobility the contract for the supply of 34 six-car Type X metro trains with an option for 11 additional trainsets suited for both fully automated operation (GOA4) and driver operation. The last train is expected to be delivered at the end of 2030. The new trains will replace the Silberpfeil fleet manufactured by Siemens, some of them being in operation since 1972.