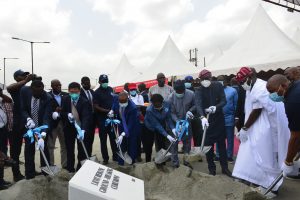 The Governor of Lagos, Babajide Sanwo-Olu, and the representatives of China Civil Engineering Construction Corporation (CCECC) have launched the construction works for the Lagos MRT Red Line with the first phase expected to be completed next year.

The ceremony was held at the proposed site of the Ikeja Train station with the attendance of Nigeria’s Minister of Transportation Rotimi Chibuike Amaechi and the Director General of the Nigerian Maritime Administration and Safety Agency (NIMASA) Bashir Jamoh.

“The flag-off of the construction of infrastructure for the standard gauge Red Line is another promise kept and it demonstrates, in practical terms, our commitment to achieve the objectives of traffic management and transportation pillar in our development agenda. This is because we recognise the role which an efficient transportation system plays in enhancing people’s quality of life and as a major driver of socio-economic development”, the governor said.

The mass rail transit corridor will be constructed in three phases. The first phase (Agbado-Iddo), which will be completed in 24 months, will be sharing track with the Federal Government’s Lagos-Ibadan railway line up to Ebute – Metta. It will have its dedicated track from Ebute – Metta to Oyingbo and will reduce the travel time from about two and a half hours to just 35 minutes. The passenger capacity of the first phase is 500,000 daily.

Lagos MRT Red Line will be 37 km-long linking Agbado and Marina and is expected to enter fully operation in 2022. The line will be served by eight stations from Agbado to Oyingbo and will have an estimated ridership of more than one million passengers per day.

To facilitate smooth operations of the Red Line, the project includes the construction of ancillary infrastructure, including six overpasses at strategic level crossing points along the rail corridor to eliminate interactions between the rail system, road and pedestrian traffic.

The unique characteristic of the Red Line is its integration with the Ikeja Bus Terminal, Oshodi–Abule Egba Bus Rapid Transit (BRT) lane, the future Orange Line, which starts from Ikeja to Agbowa, and the General Aviation Terminal One of the Murtala Muhammed International Airport through a skywalk.

“Theproject was a bold step and commitment of the Governor to solving transportion challenges in line with his administration’s development blueprint”, the Managing Director of Lagos Metropolitan Area Transport Authority (LAMATA) said.

The project is supported under the Differentiated Cash Reserve Requirement (DCRR) programme, a financing package put in place by the State Government through the Central Bank Nigeria (CBN).

The Red Line will complement the Blue Line that provides transport connection from Okokomaiko to Marina. The Blue Line is at 78 per cent completion.