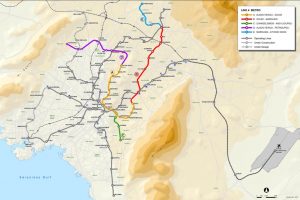 The Avax – Ghella – Alstom consortium won the tender for the construction of the first section (Section A) of Athens Metro Line 4 following the recent approval of the technical and financial offers by Attiko Metro’s Board of Directors.

According to the Athens Metro developer EUR 1.32 billion was the value of the tender. The overall foreseen project budget including contingencies, revision and works on a cost-plus basis amounts to EUR 1.51 billion.

The criterion for the award of the contract was the most economically advantageous offer. Aktor Ate –Ansaldo – Hitachi Rail Italy also submitted the bid.

The Goudi – Alsos Veikou section will have 12.8 km and 15 stations of which 9 will have transport connection to the public transport system. A new Operations Control Centre (OCC) will be constructed for Line 4, that will ensure the operation and control of Lines 1, 2 and 3, as well as of future new driverless sections and the tramway system. The new OCC will be located within the boundaries of Sepolia depot, where a one new maintenance and repair workshop will be also constructed.

The project is expected to be completed within eight years.

The section will serve many densely populated areas of Attica Basin and the centre of Athens with four new stations at Exarchia, Akademia, Kolonaki and Evangelismos. The line will offer metro transport access for important areas such as health centres and educational institutions, while improving the interconnection among the existing metro lines by adding two new transfer stations at Panepistimio/Akademia and Evangelismos. At the same time, the new metro section will relieve the pressure on the existing central metro stations due to the ever-increasing ridership demand.

The new line extends from the area of Alsos Veikou at Galatsi up to Goudi area and Katehaki. It falls within the administrative boundaries of the Municipalities of Athens, Galatsi, Kessariani and Zografou.

Athens Metro Line 4, known as the U-Line will have a total length of 38.5 km served by 35 stations crossing existing Lines 2 and 3. The entire line consists of two radial legs to Galatsi and Maroussi, as well as of one central part that runs through the center of Athens. It will be created by five sections:

In July, the Prime Minister has inaugurated the extension of metro Line 3. The Avax – Ghella – Alstom consortium is currently constructing the extension of the Line 3 to Piraeus expected to enter operation in 2022.