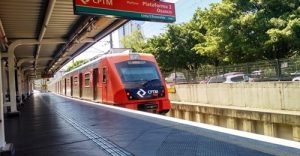 The ViaMobilidade consortium, comprising the CCR Group and Ruas Investimento e Participações, has won the international tender for the concession of lines 8-Diamond and 9-Emerald of São Paulo Metropolitan Train Company (CPTM).

USD 181.2 million (BRL 980 million) was the ViaMobilidade’s offer to operate the two urban lines in the Metropolitan Region of São Paulo. Together the two lines are 79 km – long and are served by 43 stations, carrying 1.1 million passengers per day.

Under the 30-year concession, the ViaMobilidade consortium will invest USD 591.7 million (BRL 3.2 billion) to upgrade, adapt, and modernise the infrastructure of the lines, including the purchase of 34 new trains. Within the first six years, the consortium is expected to invest USD 480.76 million (BRL 2.6 billion) to develop the transport services along the lines.

The consortium will be responsible for the modernisation of the tracks and the electrification upgrade, the installation of the telecommunication systems and the construction of an operational control centre. The Presidente Altino depot will be also modernised.

Line 8-Diamond is 41.6 km long with 22 stations connecting the Centre of São Paulo from Julio Prestes station to Itapevi at Amador Bueno station. The line has Pátio Presidente Altino for maintenance and parking of trains. Under the contract, the concessionaire will reconstruct the Ambuitá station, will construct five walkways, will renovate the Amador Bueno station and will remove the level crossing at Santa Rita by constructing a tunnel or a viaduct.

Line 9-Emerald has a length of 32.5 km served by 18 stations providing transport link between Osasco an Grajaú.

In 2019, ViaMobilidade consortium also won the concession contract to operate Sao Paulo monorail Line 15 which will have 11 stations linking Vila Prudente to Jardim Colonial. Under a USD 869 million (BRL 4.7 billion) contract, the consortium will be responsible for the operation of the line for 20 years. The consortium will invest USD 63.8 million (BRL 345 million).