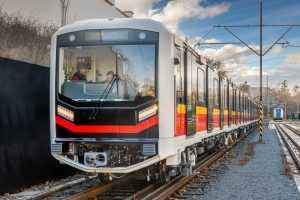 Škoda Transportation unveiled the new Warsaw metro train which enters trials on the test track at the Plzeň plant and after this phase will be completed, it will also be tested on the test circuit of the Rail Research Institute in Velim, on the Prague metro system and the metro in Warsaw.

The fine-tuning and type testing phase will be followed by “further static and dynamic fine tuning. Going forward, there will be weeks or months of static and dynamic tests in order to fine tune everything to a state of perfection. This is a standard process that all new models have to undergo” Zdeněk Sváta, Senior Vice President for Implementation in the group Škoda Transportation said.

Škoda Transportation will complete the second trainset which is currently undergoing final assembly.

The first new metro trainsets are expected to enter Warsaw metro system in the first quarter of 2022. “The inhabitants of Warsaw are really looking forward to them, because halfway through next year work will be completed on the construction of new metro stations in Bemow and Targówek“Rafał Trzaskowski, the Mayor of Warsaw said.

The fully walk-through vehicle is designed with a capacity for 1500 passengers which will benefit a clearer internal and external audio-visual information system. The trains are adapted to passengers with disabilities providing sections for wheelchair users, as well as areas for prams and bicycles.

The interior of the passenger area was designed with the aim of creating a pleasant environment for passengers and the driver. The driver will also have the use of a camera system. The cars’ bodywork is made of aluminium and was created on the largest machining centre in Europe, which is located at Škoda Transportation’s Ostrava plant. One car is approximately 20 metres long, and the entire train is 118.2 metres long. The new trains’ maximum speed is 90 km/h.

The trains allow full electro-dynamic braking in all modes of train occupancy with a preference for regenerative braking, where electrical energy is transferred back to the power system. The trains are manufactured according to EN and UIC standards.

This is a breakthrough order in the area of urban rail vehicles because the tender in Warsaw was one of the largest in Europe when it was called. Warsaw will become the eighth European capital where Škoda vehicles operate. The order also includes the delivery of spare parts, a simulator, an extended guarantee and training.

This new metro train is part of a CZK 8 billion (EUR 317 million) contract signed at the beginning of 2020 with Metro Warszawskie for the delivery of up to 45 six-car metro trains. The project received EUR 87.2 million from the EBRD and ING Bank.