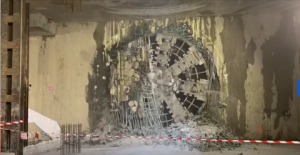 TBM Maria has break through at Kondratowicz station on the Warsaw Metro Line 2 north-eastern section. The TBM executes digging works with an average of 25 metres per day, completing the 919,5 m section from the Bródno station towards Kondratowicza station.

Currently, Zacisze, Kondratowicza and Bródno are the three metro stations build on the north-eastern section of the Line 2. They are connected by four km of tunnels.

The Astaldi – Gülermak consortium is performing the construction works on this section which are expected to be completed in September 2021.

PLN 1.4 billion (EUR 314.2 million) is the value of the project which has received European co-financing through Cohesion Fund, under the Operational Program Infrastructure and Environment 2014-2020.

In September 2019, Warsaw opened a 3.1 km eastern section served by 3 stations, from Dworzec Wileński to Trocka.

In April 2020, the Mayor has also opened a 3.4 km section with three stations (Płocka, Młynów and Księcia Janusza) on the Line 2.

The city of Warsaw intends to construct the third metro line for which a contract for a technical study was signed.