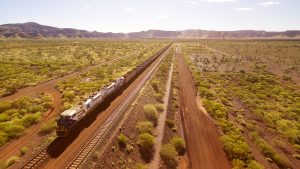 Fortescue Metals Group entered into an agreement with Wabtec for locomotive modernisation  project which represents Wabtec’s delivery of the first fleet of modernised locomotives for an Australian customer.

The fleet will be transformed into AC44C6M locomotives to meet the performance requirements of Fortescue while delivering operational and environmental efficiencies.

Under the contract, Wabtec will rebuild the locomotives to extend their life by another 20 years and the new installed equipment will determine the reduction of fuel consumption and maintenance. This will also imply the reduction of repair and overhaul expenses by up to 20 per cent. “For Fortescue, the modernised trains will deliver up to a 55 per cent increase in tractive effort and more than 40 percent increase in reliability,” says Wendy McMillan, Wabtec’s Senior Regional Vice President for South East Asia, Australia and New Zealand.

The modernised locomotives will benefit from improved performance and increased reliability with new features including a UX engine, new electrical cabinets, a new design high-efficiency radiator and radiator cab, an upgraded control system to remove obsolescence, and AC traction with individual axle control.

The locomotive modernisation contract will offer Fortescue Metals “substantial long-term capital and operating costs savings, provide the latest traction and control technology” and will enable future upgrades to alternative energy sources such as battery electric in support of Fortescue’s industry-leading target to be carbon neutral by 2030,” Mark Komene, the General Manager Hedland Operations at Fortescue said.

The new AC44C6M locomotives will be rebuilt at Wabtec’s Fort Worth facility in Texas, USA, before being shipped to Western Australia over the next two years. They will be used for rail freight transport at Fortescue’s mining operations. The company owns and provides integrated operations in Pilbara which includes the Chichester, Solomon and Western mining hubs. Its mining infrastructure is connected to the five berth Herb Elliott Port and Judith Street Harbour towage facility in Port Hedland via the fastest heavy haul railway in the world.