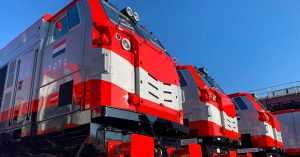 Egyptian National Railways (ENR) and Wabtec signed a contract to supply 100 Evolution Series locomotives including a multi-year service agreement to maintain the fleet. The locomotive fleet will be delivered in 2023.

The contract is funded by the European Bank for Reconstruction and Development which in 2019 announced that ENR wants to use a loan for locomotive renewal programme. According to the bank, EUR 433 million is the estimated cost of the project covering the procurement of 100 new diesel electric locomotives for passenger and freight services.
Kamal El Wazir, the Minister of Transport, Mostafa Abu El Makarem,the Chairman of ENR and Gökhan Bayhan Wabtec’s Senior Vice President for Russia/CIS, Europe, Middle East and North Africa attended the signing ceremony.

This year, Wabtec delivered the last 10 Evolution Series locomotives as part of a contract signed by General Electric and ENR in 2017 to deliver 110 locomotives and to renew 81 out-of-service units. Wabtec is present in Egypt for more than 4 decades and with this deal, ENR will have a locomotive fleet of over 300 vehicles.

“This order underscores the commitment by the Ministry of Transport and Egyptian National Railways to provide world-class passenger service. These locomotives will provide the quality, performance and reliability needed to meet the needs of Egypt’s rail network. With this agreement, we will help Egyptian National Railways move passengers and products faster and more efficiently,” Gökhan Bayhan said.

The locomotives support the modernisation of Egypt’s rail sector for which during the last years, various agreements and contracts were signed for rolling stock supply as well as infrastructure modernisation and expansion. Egypt implements wider rail reforms and programmes to develop a low carbon and accessible transport system.