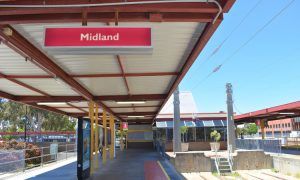 The Alliance is made up of McConnell Dowell Constructors, Georgiou Group, Arcadis Australia, and BG&E and will be responsible for the construction of the three-platform station between Helena and Cale streets. The contract also includes decommissioning and demolishing the existing 53-year-old station.

As well as the main station building, the project will include a 12-stand bus interchange, a new multi-storey car park with more than 600 parking places, a north-south pedestrian overpass, passenger toilets, lifts, stairs, a kiosk and secure parking for 96 bicycles.

The station’s new location brings it closer to the heart of the Midland Town Centre, improving accessibility between the station and important sites such as the Midland Health Centre and Midland Gate Shopping Centre. The new station will maintain the railway’s central role to enhance work opportunities and community life in the area.

Early works for the Metronet New Midland station, which is jointly funded by the Federal and Western Australian governments will commence later this year. The station is expected to have 3,300 passengers per day and until 2031 the number of passengers will grow to 3,700.

The new station will connect the passenger rail network to the new Bellevue rail car manufacturing and assembly facility, which will bring significant new employment to Midland. In June 2021, Alstom and together with the authorities launched the train facility.

The project supports Midland’s status as a Strategic Metropolitan Centre and aligns with the program of urban renewal to transform Midland into a contemporary urban centre. The entire project is led by DevelopmentWA, the State Government’s central development agency, operating across Western Australia.

Metronet is a large initiative to develop the public transport in Perth metropolitan area consisting 72 km of rail system with 22 new train stations.