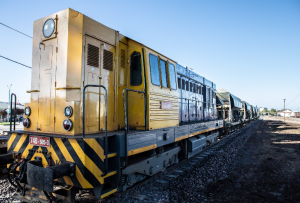 Uruguay Central Railway awarded Vossloh a contract to supply of rail fastenings as part of the modernisation works on the railway line between the Montevideo Port and Paso de los Toros.

The works on the 273-km line started in February and are expected to be completed in 2022.

Vossloh has already produced the first two rail fastening lots of the W 21 rail fastening system which are ready for shipment. The W system is especially designed for concrete sleepers on ballasted track and, thanks to its composition, allows very flexible adjustment to accommodate project-specific demands, where special rigidity or vibration requirements have to be met in individual sections. The elastic rail pad made of cellentic reliably absorbs the forces and thus offers a stable rail subsidence. With its optimised geometry and water repellent material, the screw-dowel combination NG ensures an excellent transfer of the loads into the concrete sleeper. It is not only able to withstand extreme loads but also has the additional benefit that its production causes fewer carbon emissions.

Called Ferrocarril Central, the project is one of the biggest private investment in the history of Uruguay. The project includes the maintenance of the existing railway connection and the construction of an initial 26-km double-track, secondary tracks for train crossings, a section of track for industrial access and more than 40 railway bridges which will be reinforced or built. The defined route includes the by-pass of several populated centers and the rectification of curves, to allow greater safety for trains. In addition, 12 passing loops will be constructed.

The project is performed under PPP scheme including the design, financing, construction and maintenance. In 2019, the contract was signed with Vía Central consortium, comprising Saceem and Berkes (domestic companies), Sacyr (Spain) and NGE (France).