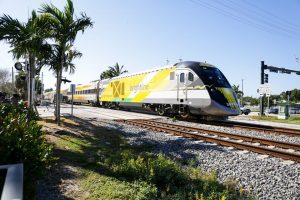 ‘This is a great opportunity to work on one of the most unique rail projects in the United States. Our PTC solution provides a robust path for Virgin Trains to meet its project schedule and goals,’ said Rajendra Jadhav, President of Wabtec’s Signalling, Communication and Wayside business.

The PTC implementation will be in two phases. Under the first one, Wabtec will install its interoperable electronic train management system (I-ETMS) PTC safety overlay on Virgin Trains USA’s 108-km corridor between Miami and West Palm Beach, Florida, including a back-office system and fitment of both freight and commuter locomotives.

The I-ETMS train control technology will be installed on 90 freight and commuter locomotives while separately, Wabtec will deliver signalling design and implementation services for the phase two portion of the project.

‘Wabtec’s PTC technology has an impressive track record in the rail industry, and this was the right solution to support the safe operation of our growing rail network. In addition, the simplicity of accommodating new and modified infrastructure to the system, and train operational efficiencies were features that were influential in selecting the I-ETMS technology,’ said Michael Cegelis, Executive Vice President, Rail Infrastructure, at Virgin Trains.