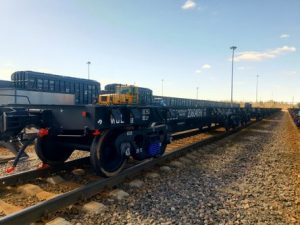 United Wagon Company will deliver 300 large-capacity container flat cars to Mongolia by the end of June, the company announced.

The first batch of flat cars, model 13-6724, will be delivered by UWC under its contract with Bodi International, LLC, one of Mongolia’s leading groups of companies in finance and banking, real estate and construction, infrastructure and mining industries.

This flat car model, new to the UWC’s product portfolio, is unrivalled in the “1,520-mm gauge” area with its loading length of 46 ft and payload capacity of 80 tonnes. The car is intended to carry large-capacity containers with a gross weight of up to 40 tonnes.

UWC will also deliver 200 flat cars of model 13-6851-05, to another Mongolian customer. The 40-ft long flat car with a payload capacity of 80 tonnes is designed for large-capacity containers and tank containers of up to 40 tonnes of gross weight, including those filled with dangerous cargoes, which is allowed by the car’s powerful draft gear.

The freight car delivered to Mongolia uses the 18-9855 bogie with an axle load of 25 tonnes which significantly increases the payload capacity of the rolling stock, prolongs its service life and improves its operational reliability.

UWC won the contract for the supply of freight cars to Mongolia in 2020. Bodi International, LLC has already started operating Tikhvin gondola cars as part of its fleet.

“The rail shipping market in our country is growing, fostered by several factors. Mongolia becomes the largest exporter of coal to China. The shipping corridor Russia-Mongolia-China is developing rapidly. As a result, the interest in rolling stock has been growing,” Banzragch Erdenebayar, Project Director at Bodi International, said.

The large-capacity container flat cars were designed at the VNICTT research centre with prototypes produced at the Tikhvin plant.