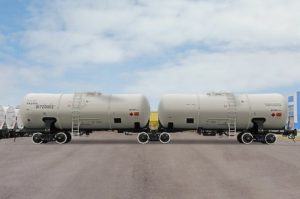 This is the sixth certified multi-axle model in the portfolio of the manufacturer for use on the 1,520-mm rail track gauge, following an LPG tank car, as well as gondola cars and hopper cars for grain and mineral fertilizers.

The model 15-629 tank car design features allow for the most efficient possible use of the car’s loading capacity when transporting light oil products with a density of up to 0.84 t/m3, thus solving the problem of underloading when standard four-axle cars are used. At present, the transport of light oil products by Russia’s current tank fleet can show underloading of up to 15% per car, affecting the efficiency of transport.

The six-axle articulated tank car consists of two sections connected by a spherical articulated connector. 160 m3 is the total volume of the two tanks with a loading capacity of 108 tonnes, which ensure the transport of a quantity of cargo similar to that transported by two standard tanks with 100% axle load usage.

The use of an articulated design allows for a reduction in the required fleet size and significant savings on freight transport.

When designing the car, existing restrictions attributable to the infrastructure of the consignors and consignees were considered. The 15-629 tank car’s length over coupler pulling faces is 24,040 mm, while the length of one section is 12,020 mm, which is comparable to the length of a standard four-axle tank.

The design of the tanks and their equipment used can withstand pressure 1.7 times higher than that of the tank cars currently being used, allowing for the safe transport of highly hazardous petroleum products. The vehicle runs on three bogies with an increased axle load of 25 tonnes. The car’s single braking system with separate brakes for each bogie allows for the simultaneous and effective braking of each section of the tank.

The six-axle car is mounted on 18-9855 bogies, which are serviced and repaired in the same manner as those used to equip UWC’s four-axle cars. UWC runs a vast network of service centres responsible for maintenance and repairs of car bogies. Currently, the network comprises of 91 centres and consignment storage places keeping spare parts, assemblies and components. The company regularly holds training sessions for its employees and qualification tests for railcar repair facilities.