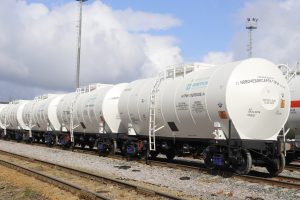 A new batch of 36 tank cars for chemicals transport were sent by the United Wagon Company to Khimprom, a major diversified enterprise specialising in the mass production of industrial chemicals. The Tikhvin-produced cars will be used to transport sodium hydroxide and other chemical products.

The 15-6900 model tank car has an increased loading capacity by 5 tonnes reaching 73 tonnes compared to standard models which ensure a capacity of 68 tonnes. The car’s volume is also increased to 54.5 m3. The car’s tank is made from low-alloy steel, and special design solutions keep the freight in a liquid state, preventing it from solidifying.

The thermal isolation element allows easy and simple access to the car’s tank during scheduled maintenance operations and is distributed in close contact with the surface of the tank.

The wagon is equipped with a model 18-9855 bogie with an increased 25-tonne axle load, improving its operational reliability and safety, and increasing the maintenance interval up to 1 million km, or 8 years. The tank car’s service life is 32 years.

“Having reliable and efficient rolling stock is hugely important to us. Given our previous experience of operating Tikhvin-produced tank cars for transporting chemicals, we have once again been able to opt for UWC’s new generation cars,” Sergey Nauman, Chief Executive Officer at Khimprom said.

The two companies are collaborating since 2016. These new tank cars for chemicals are added to the Khimprom existing fleet comprising over 100 Tikhvin-produced tank cars with thermal insulation for the transport of a wide range of chemical freight products.

According to expert data, almost 30% of sodium hydroxide freight on the Russian market in 2019 was transported in 15-6900 model Tikhvin-produced cars running on 25-tonne axle load bogies. The remaining tank cars deployed in the transport of this freight were standard cars running on bogies with an axle load of 23.5 tonnes.