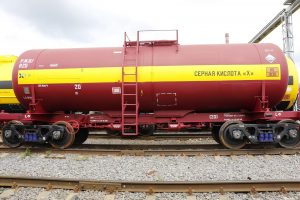 The model 15-9545 has increased load capacity of 77 tonnes and a larger tank volume of 44 m3, which allows it to accommodate up to 12% more freight, compared to the standard cars. For example, 100,000 tonnes of sulphuric acid can be carried in a smaller number of cars, when these are Tikhvin tank cars. the operator will need seven cars less compared to when using standard tank cars with a load capacity of 69 tonnes and a tank volume of 39 m³.

These savings on the size of the fleet required for shipment result in lower investment costs for the purchase of rolling stock.

The increased load capacity reduces the empty run charge per freight car, resulting in a reduction in the transport cost per tonne of cargo.

Moreover, the life cycle costs of the Tikhvin tank car will be lower than those of a standard car, which is achieved due to a longer maintenance interval increased up to 1 million km and the high operational reliability of 18-9855 bogies. All these savings enable the fleet owner to obtain a significant economic benefit from operating the 15-9545 tank car. The design and the solutions applied in the tank ensure its tightness, preventing excess pressure inside the tank and cargo leakage.

The tank has an all-metal welded structure. Its sealing elements are made of fluoroplastic, a material resistant to transported cargoes.

“Our guiding principles are, first and foremost, maintaining a high quality of the products we ship and a flexible pricing policy, while making sure that orders are executed in full and without delays. Among other things, this largely depends on the transport component of the process: on how efficient the rolling stock is and what performance it can show,” said Arseny Teplykh, Chief Executive Officer at the Ural Chemical and Metallurgical Centre.

The company plans to increase its tank car fleet from 2021 and 2023 and intends to consolidate its cooperation with United Wagon Company, Arseny Teplykh explained.

According to UWC, the sulphuric acid tank car fleet in Russia is currently represented by five car models manufactured not earlier than in 2010, with the share of new generation tank cars on 25-tonne axle load bogies being around 16%, of which almost all are 15-9545 tank cars made in Tikhvin.