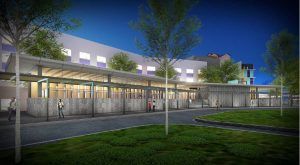 Hock Lian Seng Infrastructure won a SGD 454 million (USD 337.8 million) contract to design and construct the Serangoon North station and tunnels. The Singapore-based company has constructed the Kim Chuan Depot and Marina Bay station for Circle Line and is currently involved in the construction of Maxwell station along the Thomson-East Coast Line (TEL).

Serangoon North station is located under the busy dual lanes of Ang Mo Kio Avenue 3 and the Yio Chu Kang Road vehicular bridge. The station is wider than usual as there will be three railway tracks instead of two, with the additional track being used to facilitate the withdrawal or parking of trains. Traffic diversions will be implemented at various stages of the construction to provide the required working space for the station construction works.

The underpass connection will be constructed by mining beneath the Yio Chu Kang Road vehicular bridge, instead of the typical cut-and-cover method. This mining method will allow the construction of the underpass connection to be carried out without affecting the Yio Chu Kang Road vehicular bridge, hence minimising the inconvenience to motorists. LTA and the contractor will closely monitor the works to ensure that they are carried out safely with minimal impact to nearby stakeholders and existing structures.

The second contract worth SGD 407 million (USD 302.87 million) was awarded to Sato Kogyo company for the design and construction of Tavistock station and tunnels. The company constructed Bencoolen and Mattar stations along Downtown Line, as well as Upper Thomson station along TEL.

The Tavistock station is located along the busy roads of Ang Mo Kio Avenue 3 and surrounded by residential and commercial properties. To overcome space constraints, the intermediate launch shaft for the deployment of the tunnel boring machines will be constructed a distance away from the construction site. Tunnelling works will proceed west towards CRL Ang Mo Kio station as well as east towards the next station at Serangoon North, passing through Tavistock station.

The entire CRL line is Singapore’s 8th MRT line. It will serve existing and future developments in the eastern, north-eastern and western corridors, linking major hubs such as Jurong Lake District, Punggol Digital District and Changi region. The CRL will have almost half of its stations as interchanges with other rail lines, making it easier and more convenient for commuters to travel across the rail network.