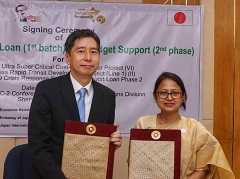 Japan International Cooperation Agency (JICA) and the Government of Bangladesh signed a JPY 115 billion (USD 1 billion) loan agreement for the development of the first underground line of Dhaka metro system.

The underground section will be served by 12 stations between Hazrat Shahjalal International Airport and Kamalapur railway station. The elevated line with 7 stations will provide transport connection between Purbachal and Bashundhara, and from here it will run in a mix of elevated and underground line to the Notun Bazar underground station.

It is expected that the early construction works will start next year, after a delay of one year. Initially the works were set to begin in December 2020, and due to pandemic, the schedule was pushed to June 2021, but the health crisis once again delayed the start of the works.

The project is split into 12 packages and 15 bidders purchased the tender documents which should be submitted by September. The detailed designs will be completed by June 2022.

The public transport development plans include the construction of a mass transit system comprising six MRT lines. At the end of August, trial run started on the MRT-6 between Uttara North and Agargaon and if all activities including the inspection are carried out as planned, the line will enter passenger operation in December 2022. The 20 km line with 16 stations will connect Uttara North and Kamalapur. MRT-6 is the first elevated transit line in the country and is estimated at USD 2.8 billion. In 2020 JICA signed an agreement to deliver safety management assistance for this new line. In March, Kawasaki Heavy Industries sent the first of 24 six-car trains which will operate the MRT-6.

According to a draft proposal, the authorities intend to construct a second underground metro network of 258 km comprising 11 routes within the next five decades to reduce traffic congestion in Dhaka and its metropolitan area. Implemented into three phases, the strategy covers the construction of a 102 km network, the second phase will include 85 km of new lines and the last one will see the construction of 71 km of lines.