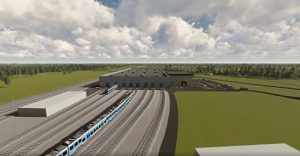 OÜ Real Project and Nord Projekt AS have completed the concept design of Ülemiste rolling stock depot which will be built in Estonia, on the border between the city of Tallinn and Rae municipality.

The design contract was awarded in December 2020.

The design has been developed and based on 3D visualization technology. The depot will be designed in several stages and the construction is expected to start in the first half of 2022.

The depot will primarily repair and maintain trains whose final terminal is Rail Baltica Ülemiste joint terminal, but the depot must be ready to provide maintenance and repair services to the rest of Rail Baltica 1435mm gauge train fleet for which the visual concept design was unveiled.

The Ülemiste rolling stock depot must enable parking for the passenger fleet and the performance of other necessary maintenance functions.

The depot can accommodate seven trainsets at a time, according to Rail Baltica’s operational plan 26 highspeed trains and 16 regional trains will move in the infrastructure.

In June 2021, RB Rail will launch the public procurement for the construction of the Ülemiste terminal which was designed by Zaha Hadid Architects and Esplan. The Rail Baltica joint venture is expecting that the terminal will be completed at the end of 2025.

The terminal will provide transport connection to the public transport system comprising tram, heavy rail and bus services in Tallinn. This terminal will serve railway lines with track gauges 1,435 mm and 1,520 mm, both those that start from the Ülemiste station, as well as those passing through.

In December 2020, two INEA grants were signed for Rail Baltica which will deliver EUR 182.2 million from the Connecting Europe Facility for projects totalling EUR 214.3 million.