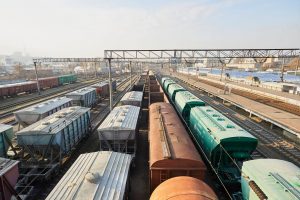 Ukrzaliznytsia plans to develop multimodal transport services with other countries and considers the establishment of its own multimodal potential, Edvin Berzins Executive Director at Ukrainian Railways said.

“That is why Ukrzaliznytsia considers it necessary to take a number of steps to explore the country’s multimodal transport potential together with shipping lines, terminal operators, freight forwarders, shippers and large industrial manufacturers,” said Edwin Berzins explained.

The plans cover the expansion of Ukrzaliznytsia’s network of terminals, including the involvement of private companies, the agreements with global logistics operators, including those represented on the Ukrainian market such as DHL, Maersk, COSCO and others.

Ukrzaliznytsia also targets to resume the organisation of piggyback transport on the Ukraine – EU route, the creation of a national office for the sale of multimodal transport services and foreign representative offices for the sale of a comprehensive services package.

Stable contractual relations with the transport and logistics companies, including the manufacturers of domestic and international market will significantly strengthen the competitive position of Ukrzaliznytsia and Ukraine as a whole in the international transport market. This will positively affect all logistics chain and industry.

The joint development of container transportation in Ukraine will be significantly facilitated by the joint work of the government, the Ministry of Infrastructure and customs. Currently there is prepared a proposal for the ministry to unify customs regulations.

The rail container transport in Ukraine has significant growth potential and in next three years it may increase from 1-2% to 15%, but this requires the development of a transit route. In the last two months, 10 trains transited Ukraine from China to Europe.

Rail transport in Ukraine has a great development potential attracting several foreign companies to open their business such as LTG Cargo and HHLA.