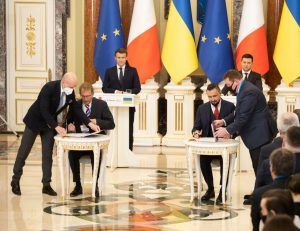 The agreement was signed in the presence of the President of Ukraine Volodymyr Zelenskyy and its French counterpart Emmanuel Macron, as well as the Minister of Infrastructure of Ukraine Kubrakov Oleksandr.

The negotiations between the two sides began in 2018 and in 2021 an intergovernmental agreement was signed under which Alstom will deliver Prima T8 locomotives. The agreement also includes a share of localisation of 35 per cent.

“The signed agreement will allow us to get much-needed electric locomotives under the best possible conditions in today’s turbulent times. The use of Ukrainian companies and specialists in the construction and maintenance of the vehicles will also bring a unique expertise to Ukraine. There is still a lot of work to be done to discuss technical details, but most of the negotiations are done” the Chairman of Ukrzaliznytsia said.

“This is not just an agreement on the supply of locomotives. This is Ukraine’s integration into the economic system and transport network of the European Union,” the Infrastructure Minister said.

Ukrzaliznytsia’s rolling stock modernisation programme is one of the priorities of the “Large Construction national plan” unveiled by country’s president. The locomotive fleet renewal is the main projects to be implemented by Ukraine Railways as its electric and diesel units are 40-year-old.