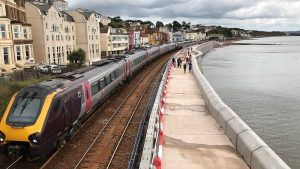 The funding will be provided to install new netting and fencing along the coastal Dawlish and Holcombe route, protecting passengers and safeguarding access to the network for local residents.

This round of funding, which follows on from three earlier phases of work and takes the total to more than GBP 150 million (EUR 178.2 million), will prevent storm debris from reaching the railway, creating strong resilient transport links to the area and giving passengers safer and more reliable journeys.

The severe weather of February 2014 cut off the South West peninsular from the rest of the railway as the mainline that runs through Dawlish in Devon is the only line connecting most of the county and all of Cornwall to the rest of the network. Following the devastating storms that damaged the Dawlish railway the government intervened to prevent this from happening again by launching the SWRRP. Under the programme, GBP 53 million (EUR 62.96 million) was provided to complete the upgrade to the train care depot in Exeter, improving service reliability and capacity for passengers across the region.

In addition, GBP 80 million (EUR 95 million) of funding was provided to deliver a new sea wall at Dawlish, between Colonnades Bridge and Kennaway Tunnel, which opened in 2020, with the next phase of work to the east currently under construction.

The SWRRP financial commitment aims at creating a more resilient railway, protecting the safety of Dawlish’s passengers and ensure that local communities are no longer at risk from being disconnected from the network for long periods of time.

Through this funding, the government has successfully rebuilt the sea wall along the Marine Parade, added further cliff protection measures and implemented accessibility improvements.