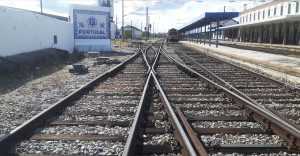 The Portuguese Secretary of State for Infrastructure Jorge Delgado and the president of IP António Laranjo, awarded Sacyr Somague/Sacyr Neopul the contract for the modernisation works of Santa Comba Dão – Mangualde section, part of the Beira Alta Line.

The EUR 57.6 million project which will be completed within two years, is part of the Ferrovia2020 programme covering the modernisation and development of Portugal rail network.

The project involves the modernisation of the 40 km rail section between Santa Comba Dão and Mangualde stations providing the railway with greater operational capacity and better safety and travel conditions, benefiting not only the freight transport as well as passenger transport on interregional connections.

The works include the complete replacement of the track superstructure, using multipurpose mono-block sleepers, whose profile allows, in a quick and economical way, to change the position of the rails if, in the future, the railway network in Spain performs the gauge conversion.

Under the contract, the Santa Comba Dão, Oliveirinha and Nelas stations will be completely modernised and the layout of their tracks will be changed to accomodate 750 meter-long trains. This change will ensure the optimisation of the conditions for freight transport operations, increasing the number of trains with greater load capacity. The Moimenta Alcafache level crossing will be removed improving the conditions of railway and road safety.

At the end of September, IP signed a EUR 68.85 million contract for the modernisation of the 34 km rail section between Mangualde and Celorico da Beira along the Linha da Beira Alta. The contract was awarded to the consortium of Consortium Mota Engil – Engenharia e Construção / Mota-Engil Railway Engennering. The work will be carried out for complete replacement of the track superstructure and and at Gouveia and Fornos de Algodres stations, the track layout will be changed to accommodate 750m trains.

The modernisation of Linha da Beira Alta is fully under construction. With this contract, IP is carrying out comprehensive track and station renewal along 190 km of the line with a total investment of EUR 307 million:

The Pampilhosa – Santa Comba Dão (34 km) project includes the modernisation of the line and the construction of Concordancia de Mealhada, a new single-track railway layout of 3.1 km in length, of which 1,250 meters will be developed viaduct. EUR 75 million is the value of the contract awarded to Comsa and its Fergrupo subsidiary;

The contract for the 45 km Santa Comba Dão – Mangualde section was awarded to Sacyr;

For the modernisation of the 35 km Mangualde – Celorico da Beira section, a EUR 68.85 million contract was signed with the consortium of Mota Engil – Engenharia e Construção / Mota-Engil Railway Engennering;

In August, a EUR 54 million contract was signed for the modernisation of 46 km-long Celorico da Beira – Guarda rail section. The consortium of Conduril- Engenharia/Teixeira Duarte – Engenharia and Construções/ Somafel – Engenharia e Obras Ferroviárias must complete the works within 2 years;

A EUR 43 million contract was signed with a consortium led by Somafel for the modernisation of 25 km of rail between Cerdeira and Vilar Formoso;

The contract between Guarda and Cerdeira has been completed, covering 14 km, with an investment of EUR 8.7 million.

The 202 km Beira Alta Line is part of the TEN-T network and Rail Freight Corridor 4 and forms the Northern International Corridor. In Portugal, the rail infrastructure manager implements projects across the three lines: Leixões, Beira Alta and Beira Baixa.