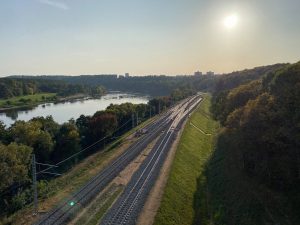 EUR 214.3 million is the total budget of these two agreements, of which the CEF contribution will be of a maximum amount of EUR 182.2 million, representing 85% of the total eligible costs. The remaining 15% will be financed by the governments of the Baltic States.

The decision to allocate the funding was taken on in July 2020 by the CEF Committee, in the framework of the 2019 CEF Transport Call.

“This additional EU funding will enable the project to further advance construction works in the key passenger terminals in Estonia and Latvia and ensure the construction of further main line section from Kaunas towards the Lithuanian – Latvian state border. Furthermore, this funding will allow to progress with the development of the key railway subsystems, planning and design of regional stations and infrastructure maintenance facilities for all three Baltic States,” said Agnis Driksna, Chairperson of the Management Board of Rail Baltica Joint Venture RB Rail AS.

According to the CEF funding for Rail Baltica, EUR 128.2 million have been provided for construction works for the second phases of Riga Central station rail section, Riga Airport section and Ülemiste passenger terminal, for the first phase of the access to Muuga freight terminal and for a part of track construction in Lithuania on the rail section from Kaunas to the Lithuanian/Latvian state border.

Under the second grant agreement, EUR 86.1 million will be invested for technical design and planning, including the preparation of energy and railway control and command subsystems.

The EU financing will be used to plan and design for local facilities and regional stations and stops on the route of Rail Baltica to ensure that the new line creates additional benefits by facilitating regional rail transport services between the regions of the Baltic States. Lastly it covers various stages of land acquisition procedure for each Baltic State, which together with designs, is unavoidable prerequisite to start future construction works.

Together with the previously signed grant agreements, Rail Baltica has already secured around EUR 1.12 billion from the EU and national funds.