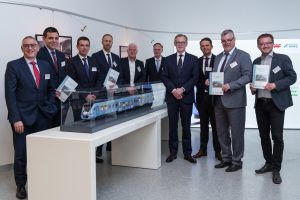 Rhine-Ruhr Transport Association (VRR) and Westfalia-Lippe Local Transport (NWL) signed with CAF a contract for the supply of a 63 BEMU fleet including the provision of maintenance services for entire life cycle of 30 years.

The train procurement contract is funded by the European Investment Bank (EIB) and NRW.Bank

The Civity BEMU trains will be delivered into two sizes each with 120 or 160 seats enabling significant capacity increase on many lines of the Niederrhein-Münsterland network. The vehicles are equipped with spacious boarding areas to ensure rapid passenger exchange. The comfortable seats, arranged in rows and in face-to-face seating groups, have a significantly greater seat pitch than the vehicles used on the routes today. The new trains are equipped with spacious and large separate multi-purpose areas for wheelchairs and bicycles or prams, which can be reached stepless from the 76 centimeter high platform. Folding tables, sockets and free Wi-Fi are available on the new train fleet.

Starting 2025 the transport authorities will switch diesel operation on the Niederrhein-Münsterland network (NMN) to locally emission-free vehicles and offer passengers additional seating capacity. The procurement of the BEMU fleet is an important step in order to be able to provide 90 percent of the transport services in the network area electrically by 2030 and to further reduce emissions of CO2, fine dust and noise.

The procurement of the BEMUs is the first SPNV network with alternative power and is part of the authorities’ plan to improve the climate balance of local public transport and to further promote green and innovative transport. By using the battery electric multiple units, the proportion of diesel kilometers in local rail passenger transport in the VRR area will drop to less than 10 percent.

“We want to encourage more people to travel by bus and train. To do this, we need a reliable and flexible rail service. In the future, clean and modern electric trains will significantly improve mobility and thus the quality of life of people in the region. In addition, the fine dust and nitrogen oxide pollution and the noise are reduced,” Hendrik Schulte, the State Secretary in the Ministry of Transport of the State of North Rhine-Westphalia said.

The order “makes the Niederrhein-Münsterland network the first SPNV network in NRW with alternative drives and at the same time the largest BEMU network in all of Germany,” VRR board member Ronald R.F. Lunser said.

The trains will enter passenger service on the following lines:

The first trains will enter operation on RE 44, RB 31 and RB 36 lines from December 2025 and the entire BEMU fleet will operate the network by December 2028.