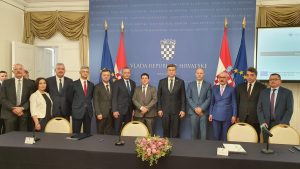 “With the signing of the contract worth HRK 2.4 billion, we begin with the modernisation of the Križevci – Koprivnica – state border section, another important section on the Croatian part of the Mediterranean corridor,” said Ivan Kršić, the President of HŽ Infrastruktura.

The project is expected to be completed within 42 months.