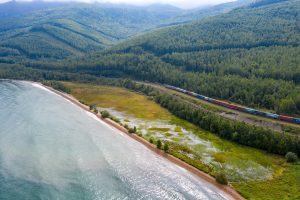 RZD Logistics, a subsidiary of Russian Railways, and Turkish logistics operator Pasifik Eurasia Logistics organised the dispatch of the first container train from Turkey to Russia by rail through the Baku-Tbilisi-Kars rail corridor.

The train loaded with household appliances – dishwashers and gas cooktops, on 15 40-ft containers departed from Marşandiz station in Ankara, Turkey to the Akhalkalaki station, on the Georgian side of the border at the end of January. From here, the containers are reloaded from 1435 mm gauge platforms to 1520 mm platforms and shipped via the Baku-Tbilisi-Kars rail through the territories of Georgia and Azerbaijan to the destination station in Russia – Vorsino, Kaluga region.

The launch of the rail container service between Turkey and Russia has opened up new opportunities for the of Russian Railways for the delivery of goods between the countries using a seamless overland route, which ensures high speed and safety of transport.

In May 2019, the directors of the railway companies of Russia, Turkey and Azerbaijan signed in Ankara a trilateral Memorandum of Cooperation for the development of rail transport crossing the countries.

The document provides for joint actions and projects to ensure regular rail transport via Baku – Tbilisi – Kars route, including the establishment of economically justified tariffs and the attraction of a new cargo base.

Using this railway route from Turkey, the first freight train was also sent to China in December 2020 to Xi’an province, covering a distance of 8,693 km within 12 days.

The railway corridor was inaugurated in 2017 directly linking Azerbaijan, Georgia and Turkey. The  first container train has been sent from Kazakhstan city of Kokshetau to the port of Mersin, in Turkey.

In 2019, the representatives of Russian Railways, Azerbaijan Railways and Turkish Railways signed an agreement to further develop the BTK by constructing a 76-km broad-gauge line from Akhalkalaki in Georgia to Kars doubling the existing rail connection which will provide increased capacity.