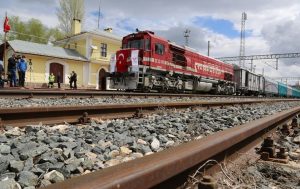 Turkish Railways TCDD reopened the 431 km Samsun-Sivas railway line after five years of modernisation works which led to the closure of the transport services.

The modernisation has started in September 2015 and the rail freight transport services were relaunched on 5 May 2020.

TCDD has renewed the entire infrastructure and superstructure of the 378 km-long section of single-track beween Samsun and Kalin and a new signalling system was installed, which is according the European Union standards.

EUR 350 million was the total cost of the project which included the installation of the ERTMS. Under the project, 48 historical bridges were renovated, 30 bridges were constructed.

A EUR 258.8 million contract was signed in 2015 for the modernisation of the Samsun- Kalin railway section, a project which has received a EUR 240 million funding from the European Union, under IPA Transport programme in Turkey, covering 85% of the project costs. The Samsun-Kalın railway project included the rehabilitation of the railway non-electrified single-track line located within a mountainous region and characterised by steep gradients with restrictive horizontal curves.

“We are starting the commercial railway freight transport services on this connection, with an important commercial and social impact. Under the project, we have completely renewed the infrastructure and superstructure of the railway line which ensures smooth rail services on east and south transport axes,” said Salih Ayhan, the Governor of Sivas.

Sivas authorities say that the track renewal works are among the highest grant funded projects in non-EU countries.

The modernised line will increase the freight traffic from 1 million tonnes to an estimated annual volume of 3 million tonnes. Travel time is 50% reduced from 9 hours to 5 hours, as the renewed railway line allows increased speeds.

The Samsun-Sivas railway line provides transport connection between the Samsun at the Black Sea and Sivas, situated in central Turkey.