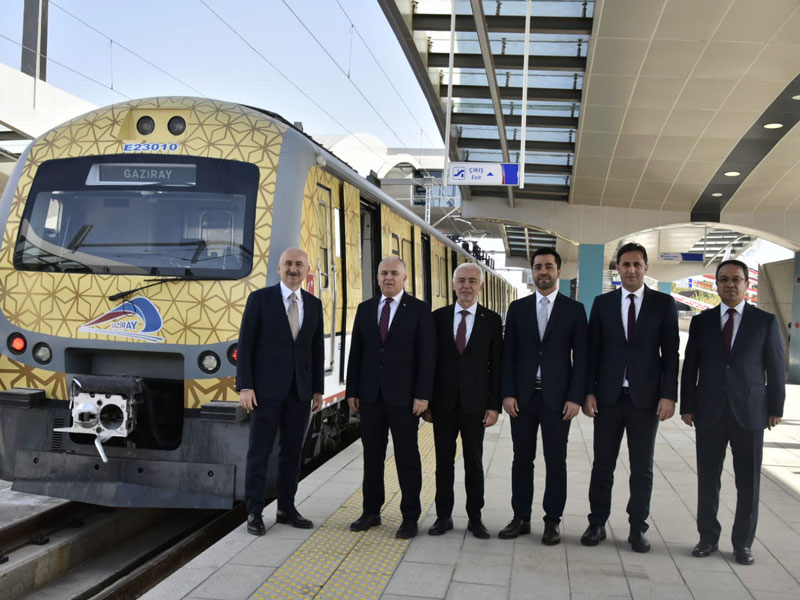 “We are happy and proud to bring Gaziray rail line to Gaziantep, one of the most important projects carried out by the Ministry.  The rail corridor allows fast services passing through the city and is suitable for urban rail transport and high-speed rail services,” the minister said at the ceremony held on November 5, 2022, at Beylerbeyi train station.

Turkey invested TRY 10 billion (USD 540 million) to deliver the 25.5 km Gaziray commuter rail line served by 16 stations, four of which being underground. The works included the modernisation and electrification of the existing Mersin – Adana – Osmaniye – Gaziantep single-track section and the construction of the double-track. The double-track line runs along a double-track line operated by intercity and high-speed trains. 5.5 km of the rail section is running through the city on a cut-and-cover tunnel west of Gaziantep station. The project also included the construction of one bridge, 12 underpasses and overpasses and 26 culverts. The new four-track electrified rail section runs from Başpınar to Taşlıca allowing trains to run at 100 km/h. The rail connection also crosses through Gaziantep Small Industrial Site (KÜSGET) and other organised industrial zones.

The line is operated by electric trains manufactured by Türasaş. In 2021, Gaziantep Metropolitan Municipality ordered 8 four-car electric multiple units with a total value of EUR 47 million. The new trains have been manufactured in partnership with Hyundai Rotem.

“The Gaziray rail route will answer transport demand and urban transport needs. It will also promote the economic development in the region. The rail services will be free of charge until the New Year,” Recep Tayyip Erdoğan said.

The Gaziray project has been implemented under a joint venture between TCDD and the Metropolitan Municipality of Gaziantep. It is Turkey’s fourth commuter railway system after the 136 km İzban system, serving the Izmir metropolitan area, the 76 km Marmaray system in Istanbul and the 37 km Başkentray line in Ankara region.

In addition, the project makes possible the first rail connection between Gaziantep and Nizip operated by Raybus two-car train which provides a capacity for 126 passengers. The 49-km railway completes the connection in the city centre at Gaziray Gar station.

“One of the biggest problems in Gaziantep in the transport infrastructure and thus massive investment is needed to answer transport needs. Strengthening the rail network in the metropolitan area is one of the most important tasks to provide fast, safe and comfortable transport services for our citizens,” the Mayor of Gaziantep Metropolitan Municipality, Fatma Şahin, said at the ceremony.

The Gaziantep city will benefit high-speed rail connection with Mersin from 2025. The 295 km railway line will cross Adana and Osmaniye, with terminus in Başpınar, from where the new commuter line starts. The new line will cut the distance between Gaziantep and Mersin by 66 km, from currently 361 km, thus reducing the journey from currently 6 hours to only 2 hours.