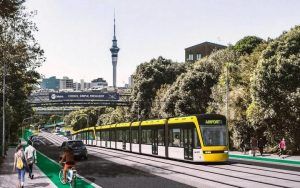 The Government of New Zealand has selected a partially tunnelled section of the Auckland Light Rail proiect which will cut travel times from the CBD to Airport in half. This route chosen out of three options is estimated at NZD 14.6 billion (USD 9.5 billion).

The underground section will run from Wynyard Quarter to Mt Roskill and then will run alongside the SH20 motorway to the airport on a surface section.

“We have deliberately chosen this option for Auckland Light Rail that will integrate with other major infrastructure projects across Auckland, like the additional Waitematā Harbour crossing, the Auckland Rapid Transit Plan and Kāinga Ora Large Scale Projects,” Grant Robertson the Deputy Prime Minister said.

In addition, the authorities confirmed that will bring forward the schedule to plan the Waitematā Harbour crossing to integrate with light rail system and with new rapid transit to the North Shore and North West. Public consultation on options for this second crossing will begin this year, with a preferred option selected in 2023.

The Auckland LRT will run on a 24 km long route served by up to 18 stops from the city centre to Māngere and the airport, running every five minutes so people can turn up and go. It will be integrated with the current train and bus hubs and the City Rail Link stations. The City Centre – Māngere line will be the backbone of the light rail network and will eventually connect with other light rail lines to the North and Northwest without having to transfer from one line to the other. This will benefit the whole city and allow far more people to move around the city freely.

When completed, the line will carry up to 15,000 passenger per hour at peak, which is four times more passengers than a dedicated busway or trackless trams. According to estimations, the line will remove up to 13 car lanes or taking 12,000 cars off the road, which is a great result for local streets, communities and carbon emissions.