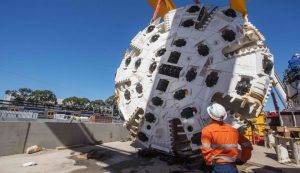 The New South Wales government has started the tender process for the construction of 50 km of metro tunnels between Greater Parramatta and Sydney CBD as part of Sydney Metro West project. Eight new stations will serve the new metro line.

The call for EOI involves the project’s first two major infrastructure packages focusing on the the delivery of twin tunnels between Westmead and The Bays.

The mega tunnel boring machine will start construction works in 2022.

In March, Turner & Townsend was selected to provide project management office (PMO) services for the project.
The Sydney Metro West project will double the capacity and cut the travel times to 20 minutes.

Under the 2019/2020 state budget the government committed an investment of AUD 6.4 billion (USD 4 billion) for the construction of Metro West.

In May 2019, Sydney has opened the North West Metro, totalling a 36-km rail system, served by 13 stations.
It is also expected that the 30-km City & Southwest metro system under Sydney Harbour will be opened in 2024.