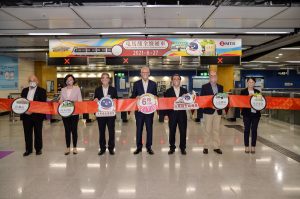 “MTR strives to keep Hong Kong moving to facilitate the city’s development and satisfy citizens’ commuting needs. The TML is a strategic railway line that connects to several existing railway lines and strengthens connectivity with the rest of the Hong Kong railway network. Passengers can now enjoy more interchange alternatives than ever before,” Rex Auyeung said at the ceremony.

At the ceremony, the 4.2 km second section of the line entered operation. The full TML sees the extension of the first section from Kai Tak station to Hung Hom station via two newly-built stations, Sung Wong Toiand To Kwa Wan,via Ho Man Tin Station finally connecting to what is currently known as the West Rail Line. The first phase of the line was opened in 2020.

The TML is linking the east and west of the New Territories and east Kowloon.

The opening marks another milestone in Hong Kong’s railway network development. The TML is the longest mass transit line in the city with a total length of 56 km serving 27 stations. With the enhancement in accessibility and connectivity of the MTR network, the entire Tuen Ma Line enables passengers to reach their destinations more easily with its six interchange stations connecting to various existing railway lines.

On 21 June, MTR and he authorities in Hong Kong signed a two-year concession agreement to operate the new line.

“Passengers can now travel around the city efficiently and comfortably with the interchange stations along the TML,” said Jacob Kam, CEO of MTR Corporation said.

To celebrate the service commencement of the full Tuen Ma Line, MTR is offering 100,000 free domestic single journey rides. Besides, passengers travelling on MTR domestic and cross-boundary journeys who enter or exit at Hin Keng, Kai Tak, Sung Wong Toi or To Kwa Wan stations can enjoy a fare discount. The special fare promotion will be available until 1 January 2022.