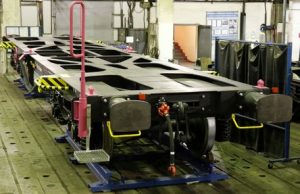 The four-axle Sgmmns flat cars designed by United Wagon Company have received the certificates proving compliance with TSI standards for car production, following the successful certification testing in Europe. This allows UWC to fulfil a previously signed contract on the supply of 200 rolling stock units.

The cars will be used by Laude Smart Intermodal on the 1,435 mm railway network. The new fleet will improve the efficiency of transport services with intermodal containers provided by the Polish logistics company which ensures cross border services between the standard-gauge network and 1,520mm rail network.

The first prototypes of four-axle Sgmmns flat cars have been undergoing a series of certification tests since February for TSI compliance. The were tested by the Czech Railway Research Institute (VUZ), that is accredited by the European Union Agency for Railways.

The cars were subjected to strength tests for static load and impact, stationary and in-motion brake tests, dynamic and strength testing in motion, and noise impact tests.

The Sgmmns flat cars are manufactured at Tikhvin plant, part of UWC.

The car has improved technical specifications compared to similar cars currently available on the European market. The vehicle has a reduced tare weight of 15.5 tonnes, compared with tare weights of 16 tonnes and higher in standard models widely available on the market. The flat car has a load capacity of 74.5 tonnes and is equipped with bogies with an axle load of 22.5 tonnes. The car has a length of 40 feet.